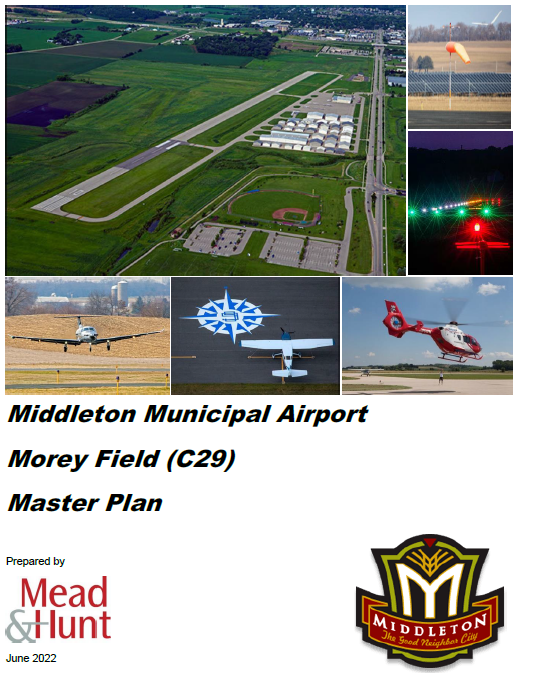 In April 2022, the Middleton Common Council adopted the master plan and airport layout plan following input from the Airport Master Plan Advisory Committee, the Airport Commission, the public, and City staff.  City officials and Mead & Hunt's project team would like to thank everyone who participating in this planning process.

On April 19, the Common Council unanimously adopted a resolution adopting the airport master plan report and ALP, bringing to a close a planning process initiated in 2018. Earlier this month, the Airport Commission concluded that the Airport Layout Plan diagram and Implementation Plan (Chapter 6) of the master plan report are consistent with the direction provided by the Council in early February.  After Mead & Hunt's project team completes technical documentation in accordance with Federal guidelines, they will provide the ALP drawing set to the FAA for their review and approval (see individual ALP sheets below). Thus, the City's role in preparation of the master plan and ALP is now complete.

On 2/01/22, the Common Council adopted Resolution 2022-08: Direction for Completing a Master Plan for Middleton Municipal Airport -- Morey Field as sponsored by Council Member Robert Burck, former chair of the Airport Master Plan Advisory Committee and member of the Airport Commission. The resolution identifies specific development alternatives to be incorporated into a new airport layout plan (ALP) so that they may become eligible for federal funding assistance.  It emphasizes that the Council will hold public hearings before deciding to proceed with any potential airport expansion project identified in the ALP.

Polco has released its final report presenting the results of the multi-community survey they conducted on behalf of the city last fall to gather input related to the Middleton Airport Master Plan.  (Open survey results can be found in Appendix D.)

Staff from Polco’s Research wing (National Research Center, NRC) led the creation, implementation, and analysis of the survey. Households invited to participate in the survey were selected randomly from a U.S. Postal Service (USPS) list of households in the City of Middleton, Town of Middleton, and Town of Springfield to respond to the survey.

Polco’s final report addressed a few issues that they and City staff identified with the draft report that was released earlier in January; however, the conclusions presented previously remain essentially unchanged.

To comment on or ask a question about the master plan project, send an email to the City’s project contact.

To receive future meeting notices and project updates, subscribe to Airport Master Plan using the City’s "Notify Me" service.  To see past and current meeting materials, scroll down this page.

Community Survey and Public Input:  The City of Middleton contracted with the National Research Center at Polco (an independent firm with over 25 years of experience in crafting and conducting surveys) to develop and distribute the 2021 Middleton Airport Survey  to randomly selected residents from the City of Middleton, Town of Middleton, and Town of Springfield. The purpose for randomly selecting residents of these communities is to ensure statistically valid results.  This survey was conducted in late fall 2021, and Polco released their final report on January 28, 2022.

This section lists public input that the City has received to date (this is not an exhaustive list).  Public input was accepted at all but the final Airport Master Plan Advisory Committee meetings (see minutes in AMPAC section below).

The Airport Master Plan Advisory Committee was established as an advisory body to the Airport Commission and Middleton Common Council. It was formed in early 2019 to oversee development of an updated master plan for the airport.  Membership listed below..

Other City meeting agendas and minutes are available here. To access past meetings, select "Meetings" in the red band at the top (directly under the city logo), under Meeting Type select desired committee, and then select a Date Range.

The advisory committee was staffed by City Planner Mark Opitz and Greg Stern, Mead & Hunt, a Middleton-based engineering consulting firm that was hired to prepare the plan. Appointed by the mayor and confirmed by the Common Council, the committee consisted of the following 13 members (along with pertinent affiliations):

July 14 "Committee of the Whole" presentation and discussion regarding the airport master plan:  Meeting Packet  Minutes

Revised Chapter 1 and Appendix I (letter "i"): Guided by input provided at the May 20 AMPAC meeting, City staff worked with Mead & Hunt's project team to update Section 1.2.3 of Chapter 1 - Inventory and  Appendix I - Open House Comments and Responses.

May 20 AMPAC meeting:  At this final meeting, AMPAC members identified and discussed their individual preferences regarding the set of alternatives developed by Mead & Hunt for the primary, east-west runway (10/28); the crosswind runway (01/19); hangar development; and the airport traffic pattern (clockwise or counterclockwise).  Meeting resources: Mead & Hunt's May 6 letter to AMPAC    Alternatives evaluation worksheets   Appendix I (subsequently revised)    May 20 AMPAC meeting minutes

Airport Master Plan Open House held on April 10:  Recording of the meeting is available here.  Event details, along with videos about key components of the airport master plan, are available at this link: www.cityofmiddleton.us/AirportOpenHouse

January 14 AMPAC meeting:   This meeting focused on the airport's Environmental Setting (see also Appendix H) and an initial discussion of the Pro's and Con's of various runway and hangar development alternatives (Runway 10/28, Runway 01/19, Hangar development).  A no-build option is included with each set of alternative concepts.

Revised Chapter 3 - Facility Requirements: Mead & Hunt has completed a full revision of Chapter 3. It has been updated to incorporate changes resulting from the revisions to Chapter 2 - Aviation Demand Forecast. This chapter was reviewed by the Airport Master Advisory Committee on Oct. 29.  Appendix F and Appendix G accompany Chapter 3.

September 24, 2020, Joint Letter from Towns of Middleton and Springfield: The City received this letter shortly before the 9/24/20 AMPAC meeting.   Town letter including their aviation consultant's analysis of Chapter 2     City response to Joint Town Letter (October 14)

FAA acceptance of the forecasts means that the consultant's work on the airport master planning project has resumed. Mead & Hunt project staff are updating the Facility Requirements chapter (to make sure it is based on the revised forecasts) before proceeding with the Alternatives Analysis phase of the master plan.

The project scope includes an emphasis on analyzing the merits and deficiencies of potentially lengthening the existing, 4,000 ft. east-west runway, upgrading the cross-wind runway, and developing additional space for hangars. The existing, no-build condition will also be included as an alternative for each of these three facilities, along with a listing of merits and deficiencies to be used in the evaluation and comparison. The consultant’s work will include reviewing land use plans and undertaking a noise analysis. A financial plan (including development of cost estimates) will be developed after the alternatives analysis phase.

or posted online via this link.